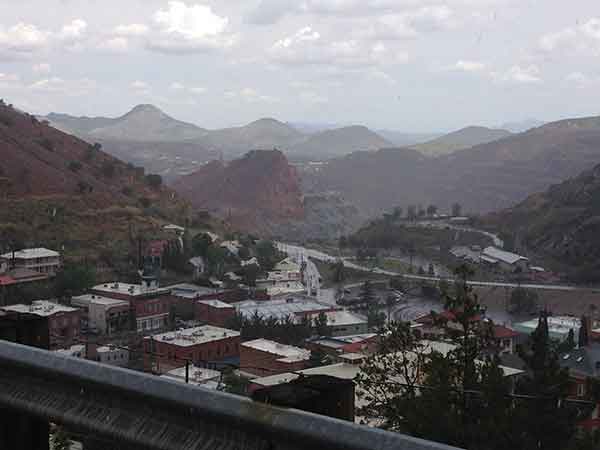 The summer rains don’t just cool things off in Bisbee. No, no, no. They add a beautiful dimension to the scenery as well. The thunderheads often start in the valley below the city and come right up into the canyons, a-flashin’ and a-roarin’ and dropping the temperature 20 degrees or so within minutes, while soaking and cooling folks who are out in the streets dancing, ’cause they can. Okay, perhaps that’s a bit dramatic, but we’ve given rainy-day tours, in our open Jeeps, to folks from Phoenix who dearly love getting a soaking. Because they can’t get it at home. END_OF_DOCUMENT_TOKEN_TO_BE_REPLACED 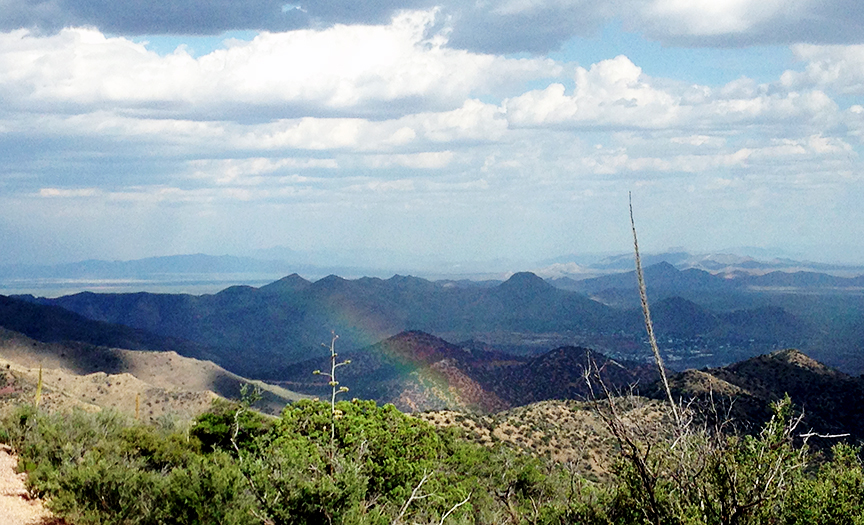 Lavender Jeep Tours are dog-friendly. we have entertained a number of clients who have taken their dogs for a ride around Bisbee, both little ones in backpacks and big ones that kept their feet warm.

(Should note that our base of operations, the Copper Queen Hotel, is dog-friendly as well. You can drink or dine on its saloon patio with your pup.)

So don’t let Fido stop you from enjoying a run through the canyons or up on the mountain. He’ll enjoy the smells as much as you enjoy the view and narrative.

And no, we don’t charge for Fido.

One of the things I like about giving tours of Bisbee for Lavender Jeep Tours is that I’m constantly learning more about the town. Just as when I dig into old newspapers and other historical sources.

During the Greater Bisbee tour and the Mining Landscape tour, I drive visitors down Cole Avenue, past Greenway School and the Greenway House and talk a bit about Jack and Isabella Greenway. I know quite a bit about Jack, the engineer and manager of the Calumet & Arizona Mining Co. interests, but I did not know that he was a good friend of famous lawman Jeff Milton. Tonight I was poring over old newspapers searching for information about Willis Woods, an escapee from the Tombstone jail and a “general bad man.”

I found linked to him another bad man named Colney Musgrave, more of a wannabe bad man, but brother of George Musgrave, one-time member of the Black Jack Ketchum gang, which from the late 1890s till about 1910 plundered at will in New Mexico and Arizona, as well as some in Texas and elsewhere. END_OF_DOCUMENT_TOKEN_TO_BE_REPLACED

It’s hard to believe it’s been 137 years since Bisbee’s “discovery.” Originally known as Mule Gulch, after the main east-west canyon, the area was frequented by Apaches and the soldiers chasing them, but it wasn’t till the summer of ’77 that someone found something worthwhile. Those folks grubstaked George Warren to come back and file more claims, which he did, though not to the benefit of the original discoverers.

George had a long and colorful history in Mule Gulch and (after 1880) Bisbee until his death in 1893. A drunk he was throughout this time, but a great story-teller and a legend in his own time. The most colorful George Warren tale took place in Charleston, near Tombstone, where he bet he could outrun a horse. He bet his interest in the Copper Queen mining claim — and lost. Had he won, he would have gotten a pretty fine horse.

George did much better after he died — sounds like an artist — it seems. His iconic photo, taken by the locally famous C.S. Fly, became the model for the miner on the Arizona State Seal, and a monument of some stature was erected at Evergreen Cemetery. The mining district at Bisbee was named for him, as was the community planned and built nearby after the turn of the century.

And more recently, Bisbee-born sculptor Don Cox was commissioned by another Bisbee native, Jim Warne, to create a newer monument to the man. Two copies exist, one at the Arizona capitol (which also has George, in the State Seal, permanently inlaid into the floor) and one at the Cochise County offices in the San Jose area. END_OF_DOCUMENT_TOKEN_TO_BE_REPLACED 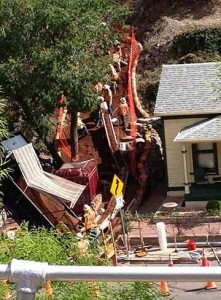 Smelter emissions weren’t the only cause of lead in the soil. House paint used to contain lead as well, and every time someone scraped the paint off into the yard, the lead remained in the soil. Nevertheless, a few years ago, Freeport McMoRan Copper & Gold Inc. began its local soil program, testing all of the soil in greater Bisbee. Where metals were found to be above a certain threshhold, the company has dug up the soil, disposed of it, replaced it with clean soil and planted it to prevent erosion. END_OF_DOCUMENT_TOKEN_TO_BE_REPLACED