You hear people as they view (generally in awe) Bisbee’s open-pit mine remarking: “Yeah, I see the lavender color.” And in the right light, yes, you can. 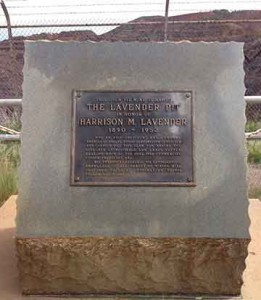 But that’s not why it’s called the Lavender Pit. The namesake is Harrison Morton (Harry) Lavender, who was the engineer and executive who brought it into existence.

He was born in South Dakota in 1890, attended schools in Colorado, and went to work in the mines at Telluride at age 17. After a few years at several laborer’s jobs, he attended the Colorado School of Mines, graduating just about in time for World War I. By 1922, he had made his way to Bisbee and in 1924, went to work for the Calumet & Arizona Mining Co. (C&A), the district’s second large mining company.

Lavender rose to shift boss and mine foreman, and when Phelps Dodge Corp. acquired C&A in 1931, he was named mine superintendent of Bisbee’s Copper Queen Branch. This was the Great Depression, of course, and for some of that time, the only mines the company was operating were the Campbell and Junction in Bisbee.

In 1935, Lavender was transferred to Douglas, which was the headquarters for all of the company’s Western mines and smelters, where he became assistant to the general manager. He became general manager within two years and oversaw development of the vast Morenci open-pit mine, today the largest copper mine in North America and one of the few billion-pound-per-year producers in the world. 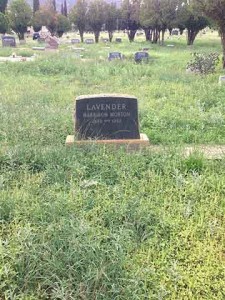 He added the title of vice president in 1946 and began working on another, smaller open-pit mine at the Bisbee East ore body. As the mine was being developed when the 1950s began, Lavender knew he had a certainly fatal disease. He resigned as general manager on March 1, 1952 and died at his home March 21.

On our mining tour, we stop by his monument at the Lavender Pit viewpoint and drive by his grave at Evergreen Cemetery, as is only appropriate.